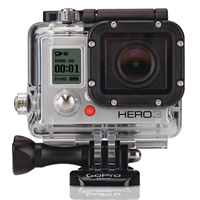 GoPro founder and CEO, Nick Woodman was interviewed by Anderson Cooper on the November 10 episode of 60 Minutes. This really caught our attention at Hansen Multimedia because the GoPro has become an integral piece of our equipment fleet over the last year. A $300 GoPro has become as valuable to us as equipment ten times the cost because of the camera’s amazing flexibility — limited only by our imaginations.

Nick Woodman, an avid surfer, conceived the idea for this portable, waterproof camera to capture quality action photographs while he rode the waves. Unable to find a quality piece of equipment at an affordable price, he started his own company. What started as a belt camera that shot still photographs over time evolved into its current configuration of fixed-lens HD video cameras with a 170-degree angle. And users have found numerous applications for the camera beyond surfing.

GoPro cameras have been affixed to radio controlled helicopters, weather balloons, helmets, racecars, skydivers, animals, just about anything you could think of. The unique design allows users to archive their adventures and lets the less adventurous live vicariously through the footage. We at Hansen Multimedia have incorporated GoPro cameras into our video productions in a variety of interesting ways and the results have been incredible.

I’m With the Band

During our coverage of the 2012 Music for All Grand National Championships, we attached GoPro cameras to several willing marching band members. The result was an immersive experience for parents, spectators, and fans — a perspective they simply can’t get from the stands. Here, you can march with the Carmel High School Band.

We at Hansen Multimedia have used GoPro cameras to capture incredible time lapse video. Here you can view the 2012 Music for All Grand National Championship finals in just two minutes. Several hours of performances seen in a whole new way — all done without tying up a lot of gear or crew, just one strategically mounted GoPro camera.

This technique was so popular that in our coverage of the 2013 event, we utilized multiple GoPro cameras to produce time lapse videos of several areas around Lucas Oil Stadium where the event is hosted. Look for the videos labeled “Time Lapse” in the 2013 Grand Nationals Playlist.

More Samples of Incredible Videos Captured with our GoPro

Watch the amazing clouds roll over Scheumann Stadium during the Cavaliers’ sessions with Percussion and Marching Band students.

Time Lapse Video of a Crowd of People

A Time Lapse of the guests entering at the Adult Swim. The Adult Swim was at the Children’s Museum of Indianapolis on February 23, 2013. This inaugural event was a sold out affair produced as a collaboration between the museum and the Sapphire Theatre.

Take a spin with the students practicing mace fundamentals. The Music for All Summer Symposium is for high school band and orchestra students, with outstanding learning experiences for students of all levels of experience, in a wide range of areas of interest.

Experience this point of view perspective (GoPro camera) from a bass clarinet player as he marches the corner of Orange Grove and Colorado Blvd in Music for All’s Bands of America Honor Band in the 124th annual Tournament of Roses Parade, January 1, 2013 in Pasadena, California.

FROM THE FIELD: Pride of Broken Arrow

Be right in the middle of all the action at during the Pride of Broken Arrow’s show at Music for All’s Bands of America Grand National Championships, presented by Yamaha, the nation’s premier high school marching band competition.

Going to the Dogs with GoPro

In 2013, we were engaged by the Humane Society of Indianapolis to cover one of the largest events of the year, the Greatest Spectacle in Dog Walking, the Mutt Strut. This event brings together people from all over the state of Indiana, along with their 4-legged friends, to walk the famous 2 1/2 mile oval of the Indianapolis Motor Speedway.

This popular benefit gains a lot of momentum from social media as pet lovers and participants tweet and share short videos produced onsite. Besides using GoPro to capture an incredible time lapse of the sun coming up and the crowds of people entering the Speedway, we got some great footage by attaching a camera to some of the canine participants.

Hansen Multimedia produced several short promotional videos to document and promote this worthy event, as well as this montage piece. In this video, we utilized several GoPro cameras in a variety of ways. You will see beautiful time lapse footage documenting the thousands of participants making their way into the Speedway, interesting camera angles, and even shots where a camera was attached to a four-legged participant to get a truly unique perspective of the event.

Tips for Video Production with GoPro

Limited Only by Our Imagination

We look forward to many opportunities to utilize GoPro cameras to enhance our video production. We have even worked with an engineer to create a custom GoPro rig, further stretching the possibilities. If you are interested in contracting Hansen Multimedia to produce unique and interesting videos to promote or document your event, contact us today!

Want to See More of our Incredible GoPro Videos?